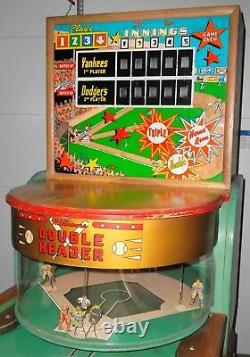 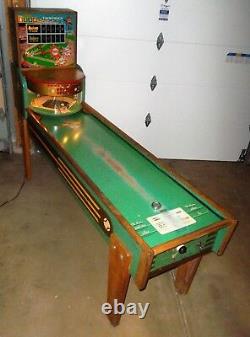 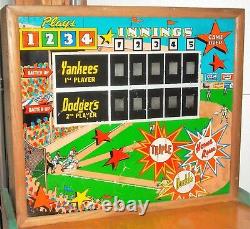 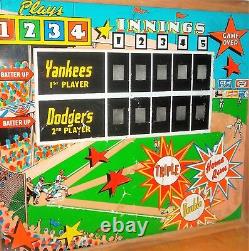 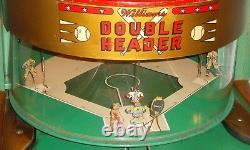 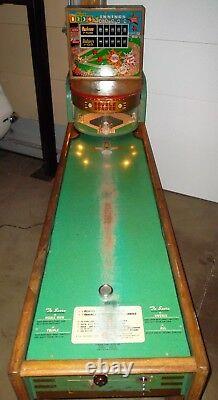 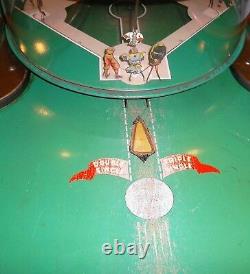 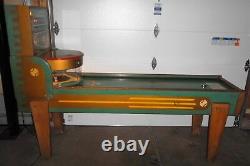 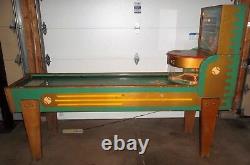 1950 Williams Double Header 2-Player Shuffle Alley Baseball Arcade Machine with Pop-DOWN Animated Baserunners. Williams certainly was VERY innovative and leading-edge when it came to their arcade machines! They were the leader in baseball machines and Double Header is no exception. It was the FIRST of their machines to offer the horizontal animated baserunners, but as opposed to the more commonly seen ones where the runners pop UP from below, the runners on this machine pop DOWN from above and then run the bases.

How cool is that for something a little different? This machine also combines a shuffle alley with baseball, making it even more unique. Depending on where you slide the puck, you can get a single, double, triple, or home run. Miss all of those targets and that is actually pretty hard to do! And consider that an out, although the machine doesn't formally call it that.

And it doesn't stop there! When your hit is made, animated base runners pop DOWN from above in the hooded area above the alley and actually run the bases according to the hit that you got! Runners remain on base while you take each of your four shots during each of five innings, but as soon as your next hit is made, they start to run, along with the batter towards first base! If you have a baseball collection, or just want a COOL animated arcade machine from the early 1950's in your gameroom, this may be the perfect candidate.

Its overall pretty nice cosmetics make it a GREAT candidate to add to any gameroom. This machine is mechanically unshopped, other than having all of the bad bulbs replaced. It has been sitting idle for a while and needs someone to pay some attention to it, and Im obviously not that guy Shame on me! It does power up and does sometimes reset the score reels and sometimes allows a puck to register hits and sometimes not.

Sometimes nothing happens and other times the runners will spin, but wont drop down. Sometimes the innings step up, other times not. So as you can see, this machine needs to be gone through cleaning and adjusting contacts in order to get everything back in correct working order. The good news is that there isnt much to this machine mechanically so that shouldnt be a huge undertaking for you.

I have WAY TOO MUCH STUFF and FAR TOO LITTLE TIME so this machine needs to get some love from a new owner. It does appear to be mechanically complete and untampered with so everything is in place to allow you to bring this machine back to life. To help with the mechanics, included is an original heavy paper instruction sheet for the Base Running unit.

With the overall pretty nice original cosmetics (for a machine that is nearly 7-0 years old,) this is a nice candidate to spend some of your time on. The original backglass is in fairly nice shape. It has had some extensive touchups done on the backside but when you look at it from the front, they are less obvious. And when you look at it from the players position at the end of the alley, they are even far less obvious.

The end result is that this backglass still presents itself pretty well, as the photos show, but it isnt perfect. In addition to the touchups on the backside, it has been sealed to prevent any further issues with the paint. There is very little missing paint, as the photos show. Because there are so many colors and graphics on this glass, the imperfections become far less obvious.

It definitely keeps with the baseball theme showing a stadium scene on the left with a baseball game in progress. There are even advertising banners on the outfield walls! This specific glass shows the Yankees playing the Dodgers. It seems like Williams produced a few different versions of the backglass (rare in itself) varying the visiting team, because even though this glass has the Yankees, other machines have the Cubs, St. Louis or Phillies and maybe others.

The home team Dodgers do seem to be consistent on all machines that I have seen, though. So if you are a Yankees or Dodgers fan, this is REALLY the machine for you! This backglass would seem to be a perfect candidate to have scanned, digitally eliminate the imperfections, and then print it on a translite.

Although short of perfect, I dont think youll be embarrassed by this glass, it still looks pretty nice. The alley is in fairly nice shape, too. It is starting to show its age in some of the graphics and lettering, but even those aren't super bad, but are far from perfect.

The center of the alley, where the puck ALWAYS slides, is where the wear can be seen. Outside of that, the alley is in pretty nice shape.

All of the graphics and lettering at the front of the alley as well as near the animated diamond area are in place. They do show some wear in their original paint but all can still be understood and look fairly nice, especially outside the center area. I believe that someone reproduced these graphics in the form of decals, so if that is the case, please let me know so I can pass on that information. All four of the animated baserunners are in place.

The lower body of one is missing while the other three are complete. All of the stationary players (four fielders, catcher, umpire, and batter) are also in place! Some of them are missing various limbs on their bodies but I think you could use the complete ones as templates to make full replacements, if you wanted. With this machine being nearly seventy years old, its a wonder that they arent completely missing! All of the painted graphics on them, including the animated runners, are in GREAT shape, adding another nice touch to the overall appearance of this machine. The plexiglass cover around the animation area is new and looks FANTASTIC!

Game play is centered around trying to score the most runs in each of your five innings of play. In two-player games, you alternate shots per inning, meaning you take your four shots for the inning, then your opponent shoots, alternating through the five innings.

You are given four shots (slides of the puck) during each inning to try and score as many runs as you can, with four obviously being the maximum. Over five innings, this means that you have a total of twenty shots during the game. During each inning, your score FOR THAT INNING is kept track of on the backglass by score reels, similar to in a boxscore. At the end of the game, you need to ADD UP the total runs for each of the five innings in order to know your final score no calculators allowed. That, in itself, is a very unique feature whereby the MACHINE doesn't give you your final score!

Whoever scores the most runs over the five innings is the winner. Each of your shots can account for a single, double, triple, or home run.

But miss all of those options in the center of the alley and no hit for you! Consider it an "out, " although the machine doesnt register outs. As hits are made, the animated baserunners pop DOWN from above and start to circle the bases! This is a COOL game to play with very unique game play that leads to competitive games when playing against another player!

The cabinet paint appears to be original. It has the normal scratches, scuffs, and dings that a machine will get in seventy years, but overall, it looks pretty nice and will certainly allow the machine to be placed in any prominent location in your home. With the original design and colors in place, you could certainly repaint it to the factory specs and it will look like new. The four original wooden legs are also with the machine, still in the natural wood finish. The wooden alley trim strips as well as the molding around the backglass and the top of the hood are also in their natural finish and really give the machine a nice look in contrast with the painted surfaces. The Williams decal on the front of the hood also looks very nice! As mentioned, the plexiglass hood covering is NEW and looks FANTASTIC. Overall, the cabinet cosmetics on this machine are pretty nice when considering they are original. The original wooden coin door is in place.

Although the original coin entry plate is in place on the door, there is no mechanism on the backside, it was replaced with a toggle switch on the front of the door that initiates a game. There is a lock/key in place for the coin door.

The original wooden rear backbox door is missing but was just plain plywood so it would be easy to make a replacement, if you wanted. The original wooden rear alley access door behind the animation unit is still in place and locks in place with a hook and eye latch on the inside of the cabinet. There is a puck included with the machine that works well, but Im not sure if it is original to the machine.

And these will be included with the machine. My preference is to work with a company that provides door to door service which handles all of the wrapping, loading, and hauling. If you are a baseball fan like me, this will make a great addition to your gameroom since it has very unique game play, along with ANIMATION!

Baseball themed machines continue to be one of the most collectible machines from this era for good reason, they are great to play and fantastic to look at! Even just powered up and sitting idle, the lighting and "look" of this machine is SURE to draw people to it! If you are a Yankees or Dodgers fan, how can you do any better than this machine? The original cabinet design on this machine features wood moldings around the backglass frame and alley sides, resulting in a very nice look. If your ultimate goal is to have a fully restored machine that looks and plays like new, without having to pay for that cost upfront, this machine is an excellent candidate for you.

As hard as these machines are getting to find anymore, this one is a great candidate for both the collector and the player. Get it while you can! Not only does it offer great looks, but it also offers GREAT and UNIQUE baseball play! And remember, another great feature is that it allows two players to compete against each other. This is a nice opportunity to add one of the classic arcade machines from the 1950's to your gameroom or collection! The item "1950 Williams Double Header Shuffle Alley Baseball Machine withPop DOWN Runners" is in sale since Monday, July 27, 2020. This item is in the category "Collectibles\Arcade, Jukeboxes & Pinball\Arcade Gaming\Non-Video Arcade Machines".

The seller is "59redvette" and is located in Woodstock, Illinois. This item can be shipped to United States.