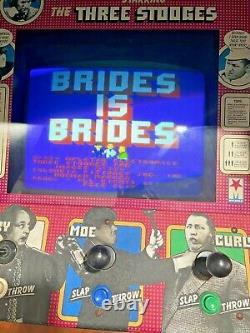 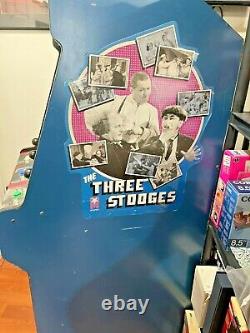 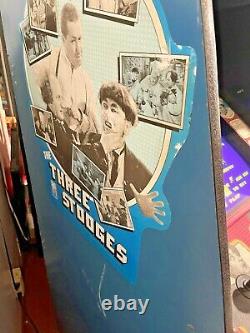 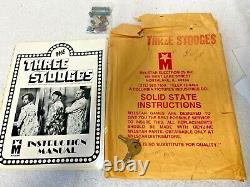 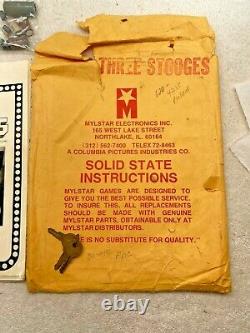 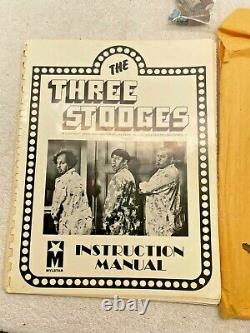 VERY RARE 3 THREE STOOGES ARCADE MACHINE GAME BRIDES IS BRIDES MYLSTAR GOTTLIEB. Game works great, was well cared for and loved. Very few are still around and even less in this original condition. Moe, Larry and Curly talk through out the game with most of their popular phrases, nuk nuk nuk.. Game was made in 1984 and After retired most of them were converted to Q-Bert machines not many stooge machines survived.

I have all the original paperwork / manual / schematics original keys. Some extra electronics that were included when I bought the machine but never used them so I'm not sure if they were replaced or just extra. I was only the second owner as the first bought it new and had it in their home the game was never in a arcade store. The free play is the only thing that works as the coin part of it was never used, available everywhere as it was common throughout all the arcade machines so I'm sure there will be no problems with getting parts or getting it repaired if needed. Shadows in the picture are from the camera and angle of the picture. There is no issues with the monitor or screen which are clear and sharp for its age. Machine has some minor issues due to age and use but in overall very good condition considering its age. Great collectible, very hard to find, did see one in the Three Stooges Museum in Philly. To keep it so I will not accept any low ball offers. The game features digital voice samples. At the start of the game, up to three players control Moe Howard, Larry Fine. Players must help the Three Stooges find their fiancées, Cora, Nora and Dora, who were kidnapped by the Mad Scientist.

In all rooms, players must find three hidden keys that unlock the exit. Interfering socialites and cops are dealt with in typical Stooges-style: face slaps, hammer hits, and the ever-dependable cream pie throws. In the bonus rounds, players must watch our for the opera singer's sour notes, as well as cops, while collecting the three keys to the exit. In the Mad Scientist's laboratory, the players will be able to save only one fiancée, before players must find the other two fiancées.

A 3-player game where each person controls one of the stooges: Curly, Larry or Moe. The game features face-slapping, pie-throwing, the theme "Three Blind Mice" and more. The game can be played by up to three players; if there are fewer players, the computer will control the other Stooges. This item is in the category "Collectibles\Arcade, Jukeboxes & Pinball\Arcade Gaming\Video Arcade Machines". The seller is "gamebuster" and is located in this country: US. This item can be shipped to United States.