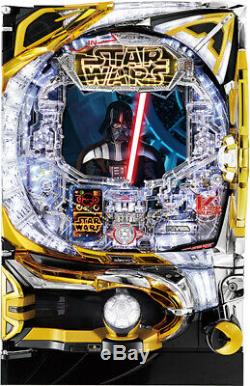 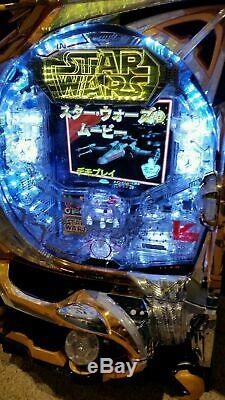 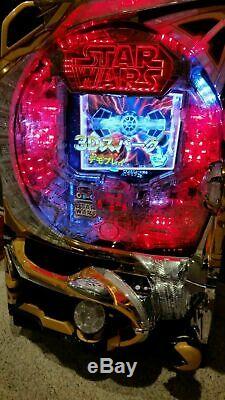 (Frame color TBD: Unit is enroute we'll update when these arrive). In this game you can experience an original world featuring the dark Sith lord Darth Vader as the main character. The highlight is the fierce CG animated original battle! Of course you will do battle against Jedi's' like Yoda and Luke Skywalker, but you can also team up with Darth Maul for an alliance that could never occur in the films! Also, if you meet certain conditions, you can even battle against your former self: Anakin Skywalker!!

Furthermore, it is equipped with no-glasses 3D, and many other accessories that make you feel immersed. This is a must-see for fans! Yes, we've got them. The HOTTEST little known game from the other side of the world.

In a nutshell: Gambling is Illegal in Japan. After WWII, someone figured out how to bypass that rule with these Vertical Pinball games. Apparently laws in Japan require Pachinko Machines to be replaced every year so what to do with all these perfectly good entertainment devices?? Unfortunately that R2 was a custom job but we've seen some really talented work from collectors over at the RPF, maybe someone will design a case for us?

Direct from Japan's Pachinko Parlors is Sankyo's series of Star Wars pachinko machines exclusively for the Japanese market where pachinko parlors are very popular. The machines features Vaders Tie-Fighter, Multiple High-Def LCD Screens and even a Miniture Vader himself that helps you battle your way to winning!

Super Sized LCD screen plays footage from all 6 Episodes as well as extensive rendered imagery developed just for the game. The Game is quite simple, almost like a vertical Pinball Machine... Load up the machine and front hopper with balls. A quick turn of the handle causes to balls to be fired one at a time up to the top of the machine.

They then cascade down though various gates, pins, gears & wheels accumulating points (& thus more balls) for you. Depending on how far you turn the handle changes the force and the aim of the balls. The primary goal is to aim for the "Start Gate" which start the center wheels spinning and depending on what 3 images appear, move you up the levels. Change levels and short movies run on the main screen. Various Cut-Scenes and music play at different points during play along with a Droids on the bottom of the screen!

It's a total immersion in game from the start. This NEW & IMPROVED STAR WARS Game has tons of interactive games to enjoy utilizing the latest Lumina Crystal Frame.. Lots of surprise games - we have yet to play it all! The epic Star Wars comes to life on a beautiful LCD display with actual film clip animation and crisp audio theme tracks. Catch the fever of Star Wars pachinko today. This item makes a great game room upgrade. Star Wars 2015 Pachinko Machine. These are extremely hard to find and import in! Get one now and have an unique look added to your Home Theater Or Game Room! If your in the neighborhood drop by and play a round with us on ours........... Please Note: These are the Actual Machines used in Pachinko Parlors and thus may have a few minor scratches on them. Also they were originally designed to be installed "in the wall" in Japan so they have "Open Backs".

Local customers we do offer a "White Glove" Custom Installation in your home. We can also provide instructions for building your own cabinet but it is totally not necessary for use. Nor can they be modified to accept any coin/token/etc of any kind. These Machines are for AMUSEMENT purposes for Home use only.

We are not to be held responsible for any illegal or misuse of these machines or any violations of local or State laws. They run on Pachinko Balls that's it! They are however VERY FUN and addictive and tend to be found in groups of two or more. Check out our other Movie Themed Collectibles..

WE ARE fully Authorized by for Everything we sell. The item "Star Wars Pachinko Machine BATTLE OF VADER Japanese Slot Arcade Game 2119 NYCC" is in sale since Saturday, December 28, 2019. This item is in the category "Collectibles\Arcade, Jukeboxes & Pinball\Pachinko". The seller is "billanddeb" and is located in Monroe, Connecticut.

This item can be shipped worldwide.