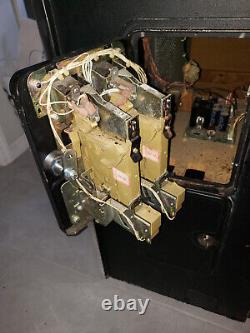 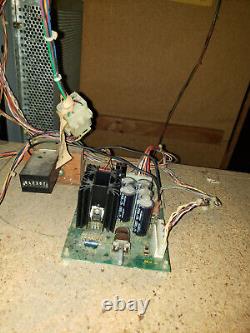 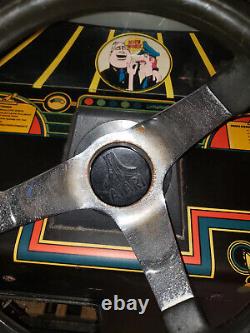 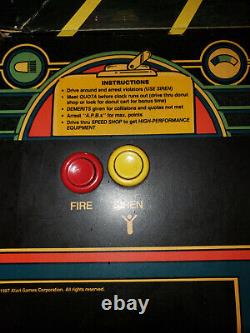 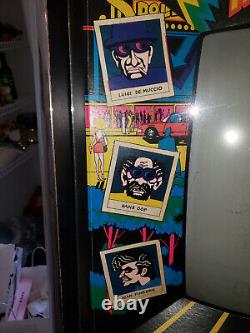 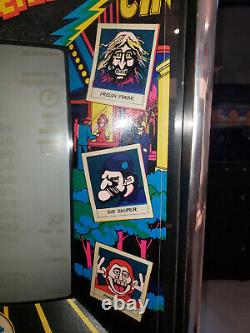 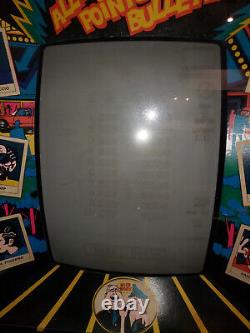 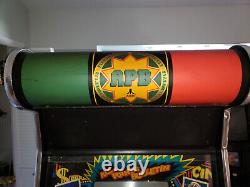 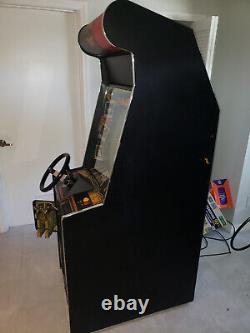 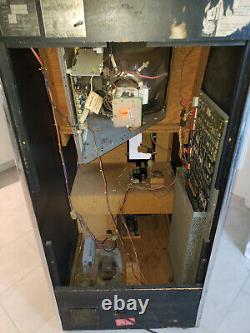 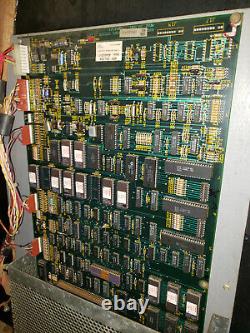 ARCADE MACHINE ATARI 1987 ORIGINAL PCB Monitor Cabinet. TESTED AND WORKING, see video. No side art, no seat, screen has light burnt in image of high scores, not visible when playing. Steering Wheel same as for game Super Sprint. APB ("All Points Bulletin") is a video game released in arcades by Atari Games in 1987. The player assumes the role of "Officer Bob, " a rookie police officer. As Bob, players drive around the city, ticketing motorists for minor infractions and pulling over more serious offenders. Eventually, players must apprehend criminals for which an all-points bulletin has been called. The arcade cabinet looks like a police car, with a gas pedal, steering wheel and a siren button, complete with flashing lights atop the unit. The game's cartoonish visuals and sense of humor gained it positive reviews. The game was slightly criticized for its difficulty; the game's developers later admitted that a long development cycle had resulted in the gameplay growing more complicated than originally planned.

Gameplay The object of the game is to meet (or exceed) the daily quota of citing or arresting various types of law-breakers within a time limit for the day. The player is given an overhead view of Officer Bob's patrol car, number 54. The player controls the car with a gas pedal and a steering wheel. [3] Bonuses are awarded for a "perfect day" and each arrest over the quota. Picking up donuts extends the day's time limit.

[4] The first day of the game is where the player must drive on a closed course and use his siren on marked traffic cones. From the second day onwards, the player will ticket common misdemeanor infractions (such as littering) by pulling up behind them, pushing the siren button and having them pull over.

Certain offenders require more siren taps to be pulled over. Specific offenses are tied directly to distinctive vehicles e. Only the pink convertibles toss litter, and that is the only offense they will commit. The exception to this is speeding, eventually introduced into the game, which can be perpetrated by any vehicle. Soon new petty lawbreakers are introduced, to include road rage, drunk driving, dopers, et cetera. The game also gives the player the task of arresting fugitive felons. Every other day, starting on the third day, the player can go after an A. [5] The stage will start with a scene of multiple officers seen in silhouette where the Chief is showing a mugshot of a suspect wanted for a major crime, the vehicle to be on the lookout for, along with the words "Get this crook today". This is done by filling the "Confess-O-Meter" by tapping alternatively on the "fire" and "siren" buttons.

Suspects are named, often in a manner according to their offense: "Bernie Gasman" (wanted for arson), "Cool Hand Duke" (wanted for pimping), "Buzz Geiger" (wanted for nuclear fuel theft). Should Officer Bob get an APB suspect to the station and force him or her to confess, a screen of "Bob's Top 10" will be shown where the convict is then put behind bars and a brief musical tone akin to "Dragnet" is played. After Day 16, no other petty violators are introduced.

The daily quota will be a combination of those above. Other petty violators seen in the game but not formally introduced are hitchhikers and distressed motorists, seen by a man working on a car at a road shoulder and his wife saying Help! The game's life gauge of sorts is a demerit meter.

The game ends when this meter is maxed out. When the demerit limit is reached, the message TOO MANY DEMERITS. [3] is displayed, along with Officer Bob being dragged from the car, handcuffed, and thrown either into the back of a paddy wagon or into a garbage can. Demerits are gotten for colliding with cones and other vehicles with the siren off, shooting non-offender vehicles, running into donut huts and pedestrians, running out of gas (if the quota is met), and failing to get a confession from an A. Also, demerits come from the player's car exploding through getting hit with dynamite, high-speed collisions with trains and other obstacles, and attempting to jump construction pits at too low a speed.

Failure to meet the quota when time expired will have one of four comical scenes, where Officer Bob is dressed down by the Chief for substandard performance, either getting scorched by "dragon breath", strangled by the Chief tugging on Bob's collar, having his nose honked, or having his patrolman's hat draped over his eyes. In addition, the player will be also be given one demerit multiplied by every unticketed infraction.

Should this happen on an A. Day but the player successfully apprehended the most wanted suspect, Officer Bob is excused from the quota.

Should the player meet the quota, he will then get a radio message "Car 54, return to station", and the player must drive back to the starting point or another police station which has parked squad cars and a space marked "Reserved for Officer Bob". In this case, it will show a pleasant Chief remarking "Nice work" to Officer Bob. The game cabinet is generally a standard upright. The main controls consist of a steering wheel, a siren button, a "fire" button for the gun and an accelerator pedal.

The cabinet has two lights on top, red and blue, which flash when the player presses the siren button. [3] Units feature a detachable seat which can be used to convert the cabinet into a sit-down game. Cheats, Tricks, Bugs, and Easter Eggs.

If you are having problems catching up to an A. Simply stop and he/she will drive off the screen and re-appear right behind you in a couple of seconds (this works real well on narrow, crowded roads). Confess, be sure to tap one gun and one siren button. If you tap both gun or both siren buttons, they will cancel each other out. You can arrest common criminals faster if you have the gun by tapping both the siren and gun at the same time (just be sure you are aiming right at them).

According to a booklet that came with C+VG Magazine of Feb' 1988, there is a bug in APB that can get you a lot of points.. It's described as follows:'When you find the train, get infront of it, and let it push you across the screen.

It will shove you through a lot of rubbish, and after a while, you will get millions of points. Also noteably, is a mention of a similar bug in Paperboy, but it's not described any further..

Paperboy is a system-II game as well, so it would seem possible. The bug seems unreproducable on mame, doing so will get the car'stuck' on the tracks. Join Officer Bob on a very politcally-incorrect, never-ending quest to meet his daily quota by arresting hitchhikers, litterbugs, honkers, dopers, speeders, assaulters, murderers, and the A.

S for questioning but do not get caught or else they will be released because of police brutality. Officer Bob starts each day at one of several police stations in the area. His daily quota is presented and you must use a targeting crosshair to arrest offenders by tapping the appropriate amount of times (or shoot them if you have the gun) to arrest them.

Time and fuel are limited so you need to find donut huts and stands or donuts lying off the beaten path to extend your time and gas pads or tow trucks to get more gas. Once you have met your quota, scores are doubled for each subsequent arrest.

Return to the station before time/gas runs out for a bonus. You get demerits for collisions without your siren on, crashing, exploding and running over pedestrians. You can lose one demerit every 10,000 points or if you drive a perfect day (meeting your quota without ANY collisions, explosions, or other wrong doing). Every other day (starting with the 3rd day), the chief will present an A. That you can catch and provide information as to where he/she was last seen. You must then find and wear down their "resist-o-meter" and ram them off the road to capture them. Return them to the station before time/gas runs out and you will not need to fill your quota that day.

After capturing, you must then make them confess by rapidly tapping the siren and gun buttons to bring the "confess-o-meter" up to full before the chief walks in and sees you choking them. If you get caught, the A. Is let go and you get one additional demerit for each item you failed to take care of on your quota, thus it's usually a good idea to fill as much of your quota as possible before capturing an A. S total, but the game does not end if you capture them all.

The game ends when you hit your demerit maximum. This item is in the category "Collectibles\Arcade, Jukeboxes & Pinball\Arcade Gaming\Video Arcade Machines". The seller is "funkyformats" and is located in this country: US. This item can be shipped to United States.